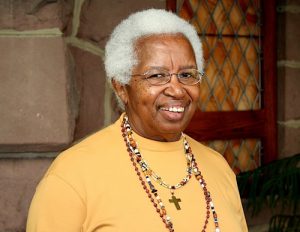 The American Chemical Society Division of Professional Relations Henry A. Hill Award honors persons who have served the profession in the area of professional relations in a unique and distinguished manner.  The 2020 recipient of the Henry Hill Award is Jeanette Brown.

Jeanette Brown has a “body of work that spans over six decades and she has been instrumental in the careers of numerous chemists during that time” according to Zakiya S. Wilson-Kennedy, Assistant Dean for Diversity & Inclusion, College of Science Louisiana State University. She was born in New York in 1934 where she began to study chemistry at an early age. She pursued and received her bachelor’s degree in chemistry from Hunter College in 1956 as one of two African Americans in the inaugural class of chemistry majors before moving to the University of Minnesota where she became the first African American woman to achieve a Master’s Degree in Organic Chemistry from the University of Minnesota. After finishing her education, Jeanette began her industrial career at CIBA Pharmaceutical Company where she specialized in drug development before eventually moving to Merck in 1969 where she authored 15 publications and received a patent for her work synthesizing novel medicinal compounds. Jeanette joined the faculty of the New Jersey Institute of Technology in 1993 where she became a champion for African American students interested in STEM careers.

Throughout her career she has been passionately devoted to improving diversity within the STEM fields. Jeanette served on the National Science Foundation Committee on Equal Opportunity for Women Minorities and Persons with Disabilities and authored the book African American Women Chemists in 2011. Her second book published in 2018, African American Women Chemists in the Modern Era, continues this legacy while focusing on contemporary women who have benefitted from the Civil Rights Act and are actively contributing to the fields of chemistry and chemical engineering. Jeanette is the 2005 Outstanding Achievement Award recipient from the University of Minnesota and was named the 2009 Glenn E & Barbara Hodson Ullyot Scholar by the Chemical Heritage Foundation. She is a 2007 Fellow of the Association for Women in Science and 2009 Fellow of the American Chemical Society. Above all else, Jeanette is a passionate mentor and champion for countless chemists from underrepresented communities. Allison Aldridge, Compliance Safety Officer with the U.S. FDA, recalls how “she saw me on the street and invited me to join her and a friend for lunch. Since that time, she has given me advice on my professional career and encouraged me to become more involved with ACS. I am fortunate to have her as a friend and mentor.”

A ceremony celebrating the 2020 Henry A. Hill Award recipient will be held on Tuesday, March 24th from 5-7pm in the Horizons Rooftop Ballroom of the Philadelphia 201 Hotel as part of the 259th National Meeting of the American Chemical Society in Philadelphia, PA.